York Minster, and rebels in fantasy 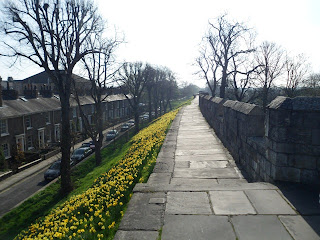 Hopped on the train on the weekend to visit York. (That's down in the middle of England, for those who don't know. Kind of halfway between Northumberland and London.)

And look, it's spring! Sunshine! Daffodils beside the wall! Leaves on the trees! ... well, there aren't. Not yet. But we can pretend! 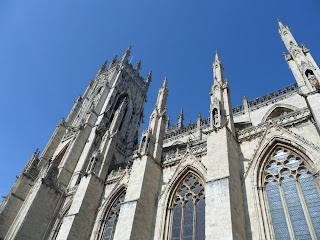 Here's a pic of York Minster, or part of it. it's too big to photograph with a little digital camera.

It's actually the Cathedral of York -- the archbishopric of York is second only to Canterbury in seniority, apparently. But it's called a Minster because it has an Anglo-Saxon connection -- the existing building was built on the site of an old Anglo-Saxon church, before the Normans barged in and did for them. There are also Roman ruins beneath. Old Stuff. Yeah.

And an odd thing occurred to me, while I was inside York Minster, marvelling at Old Stuff:

The English (on the whole) aren't proud of their Civil War.

Granted, this occurred to me as I was listening to our tour guide tell the story of the Minster's stunningly beautiful and acoustically perfect Chapter House, which only narrowly escaped being sold off and pulled down for stone by a bunch of Commonwealth Puritans, who had abolished bishops (as all good Puritans would) and therefore saw no need for a Chapter House.

This tour guide was an Anglican. He didn't like Puritans. But even so, it struck me that you don't hear many English people waxing nostalgic for the good old days of Cromwell and the Protectorate. Sure, it was a while ago. There aren't many 400-year-old English people. But you know what I mean.

Still, it put an odd taste in my mouth. I come from a culture -- and so do Americans -- where rebellion, hell-raising and civil disobedience is lauded. Eureka Stockade. Mutiny on the Bounty. Rum Rebellion. The Wild West, Confederates vs Yankees, the civil rights movement. (Unless you're one of those Marxist fellows, of course, in which case off with your heads! etc.. But never mind about that.)

Fact was, Charles I was an astonishingly bad king with godly delusions. The system needed fixing. They fixed it -- made the monarch accountable -- and it's still fixed today. I think that deserves at least a small round of applause.

Anyway. Obligatory writing-related musing: in high fantasy, we love hereditary monarchies. Mr. Grimy Goat-Herder is the 'rightful king', so he's our hero, no matter what kind of moron he is. The throne is 'his by right'. Why? Because the prophecy says so. And we'll cheer for Grimy while he starts horrendous wars to get his hands on that crown.

Whereas in urban fantasy, we generally 'root' for the rebels. The lone wolves, the kick-ass vampire hunters, the cure-is-worse-than-the-disease law-enforcement types. They're anti-establishment, even if they're part of the establishment they're fighting against. The ones who rebel against authority and never do what they're told.

I also notice (at least it appears this way to me) that there's very little UF on the shelves in England.

Perhaps someone needs to write a kick-ass flintlock-punk UF. Solomon Kane with a purpose. A Puritan Anita Blake who hunts down Royalist vampires and dirty Popish witches for Cromwell's Commonwealth, whilst shagging dashing Cavalier werewolves on the side and secretly flirting with the old religion.