Welcome to my friend Erin Moira O'Hara with her new ghost romance, THE KNIGHT OF CASTLE KILDARE.

Firstly, as always - check out the hot dude: 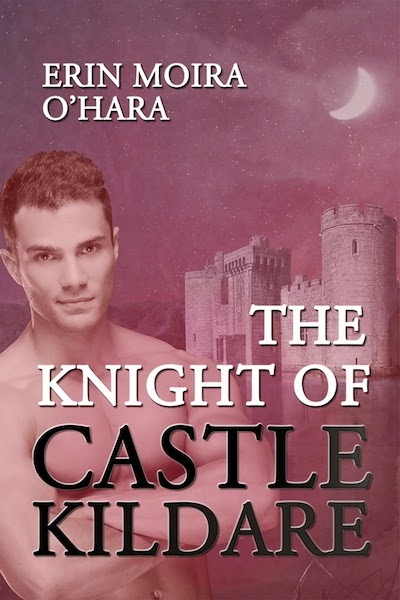 Mmm. Ghostly-moon-mist-dude-castle! You can see what to expect from this book, eh? Clean, simple, but effective. Nice work!

In case you needed more clues, here's the lowdown:

Modern woman Kate Manning has always been fascinated by Sir Caleb, a fifteenth century knight whose portrait hangs in the mysterious Castle of Kildare. Now the new owner of the castle, Kate finds herself even more drawn to him, until one day the unbelievable happens: Caleb steps out of the portrait.

Frozen in time since a gypsy cursed him hundreds of years ago, Caleb awakens at the touch of the most desirable woman he's ever seen. Yet to end the curse and free himself from the portrait forever, he must claim the heart of a woman with Romani blood – not this flirtatious blonde who tempts him beyond belief.

As Caleb fights against his growing feelings for Kate, he must also find a way to keep her safe from those obsessed with the castle's hidden treasure. There are some willing to do anything to unearth it, no matter who gets in their way…

Now, I have a few burning questions for Erin:

Tell us about the characters in The Knight of Castle Kildare. What inspired them?

The knight of Castle Kildare was inspired by an old TV series called The Ghost and Mrs. Muir. It always frustrated me that Captain Greg (the ghost) and Mrs. Muir (a widow with two children) could never actually get together.
My story is based on a sexy young knight called Caleb from the sixteenth century and a modern day, independent woman, called Katrina who has never had a serious boyfriend.

Your hero in Knight is a ghost, of sorts, and an Elizabethan ghost at that – what challenges did that present for you, in writing a romance with a modern (and living!) heroine?

My biggest challenge was to restore Sir Caleb, a supposed ghost to life. Aha, he could have been cursed by a gypsy, not actually killed. This frustrates him greatly as he hates the gypsy who cursed him and vows to wring the neck of any gypsy who crosses his path. Big problem.
Another challenge was coming up with a good reason for Katrina to be such an innocent in this day and age. After a bit of thought, I realised it’s Katrina’s infatuation with the handsome Knight and her grandmother’s enthralling stories that have prevented her having a normal relationship with any other man.

Are you a history fan? What kind of research did you do to write this book?

I’m not a big history buff, although I used Queen Elizabeth I in The Knight of Castle Kildare, so I needed to research her reign and pilgrimages through England. I also needed to research the Romani Gypsies around that time. I was astonished to discover the Romani people (as they liked to be known) were often executed or chased out of the country. It amazes me what humans will do to each other, even in this day. However, this fact helped greatly with my storyline.

What’s next for you – what are you writing/publishing now?

At the moment I’m working on suspense series based around six ex-SAS soldiers, who have formed a security protection service. They will do whatever it takes to get the job done. Their assignments take place in Australia and other parts of the world, wherever the job requires them to be. Each of my heroes has his own demons to deal with and a woman who will tie him in knots and frustrate him in everyway possible.

What do you like most about The Knight of Castle Kildare?

It’s a light fun read with a little suspense, passion and a twist or two. The main characters just clicked, even Miles (the butler) with his dry sense of humour. I based him on Colin Firth in a very straight-laced way.


Well, any kind of Colin Firth - strait-laced or otherwise - is good with me. Thanks, Erin :)

You can check out THE KNIGHT OF CASTLE KILDARE ebook here:

So, do you enjoy ghost romances? Kind of an old-fashioned thing, right... or do you say NOT, and bring back the ghostly hero?

Today is the cover reveal for her new sci-fi romance novella TETHERED. What do you think? Intriguing, yeah? The dude is kind of a mysterious monk type... but there's a spaceship, and nebulas and stuff. Hmm. What could it mean? Are there monks in space? Or is he just in disguise! which would be really cool, too?

Either way, it's eye-catching. Leave some comment love and tell us what you think! 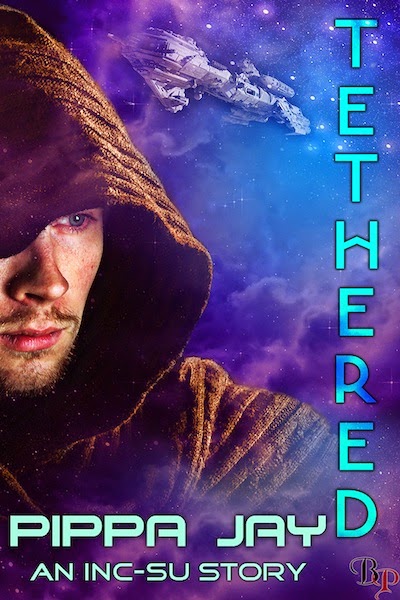 She can kill with a kiss. But can assassin Tyree also heal one man's grief, and bring peace to a galaxy threatened by war?

For Tyree of the Su, being an assassin isn’t simply something she was trained for. It's the sole reason for her existence. A genetically enhanced clone—one of many in Refuge—she's about to learn her secluded lifestyle, and that of all her kind, is under threat by a race capable of neutralizing their special talents to leave them defenseless.

For Zander D'joren, being a diplomat has not only cost him his appearance, but also the love of his life. Scarred, grieving, he must nonetheless continue in his role as co-delegate to the fearsome Tier-vane or risk a conflict that could only end one way.

Now both of them need to keep each other alive and maintain a perilous deception long enough to renegotiate the treaty with the Tier-vane, or throw their people into a war that could wipe out Terrans and Inc-Su alike. But there's more at stake than humanity, whether true or modified. Can the love growing between them save them both? Or merely hasten their destruction?

Sounds lots of fun, eh? I like assassins, especially space assassins. And scarred dudes are cool.

TETHERED comes out on 25th July - you can add it to your Goodreads shelf.

Also, sign up to Pippa's newsletter for updates.
Posted by Erica Hayes at 7:00 PM 2 comments

Email ThisBlogThis!Share to TwitterShare to FacebookShare to Pinterest
Links to this post
Labels: authors i know, cool if i may say so myself, cover reveal, sci-fi
Newer Posts Older Posts Home
Subscribe to: Posts (Atom)