I promised I'd tell you about my December release, DRAGONFLY.

Conveniently, I've been tagged for The Next Big Thing by Areteus, so here goes:

What is the working title of your book?  DRAGONFLY. It used to be called quite a few other things, including 'that sci-fi manuscript' and 'the short one' (it used to be a novella; now it's a full-length novel).

Where did the idea come from for the book? Space pirates!! Cool bad guys in spaceships. We need more of them, I thought. This book is what happened. It now has secret agents, super-intelligent terrorist geeks and space marines, too. And an evil empire. Yay! 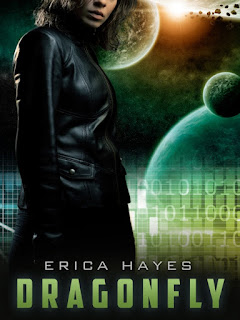 What genre does your book fall under? Romantic sci-fi? Space opera? Spaceships and rayguns, anyhow, with a cool kick-ass heroine. That's her on the cover. Like, y'know, an urban fantasy heroine. Except in space. Geddit?

Which actors would you choose to play your characters in a movie? Oh, I hate this question :) Um. In my head, the heroine, Carrie, looks a bit like Jodie Foster, or maybe the actress who plays the futuristic cop in Continuum. For anyone who follows cricket, Lukas the space pirate looks sort of like Chris Gayle.

How long did it take you to write the first draft of your manuscript? This one kind of developed over a couple of years. It was shorter at first, and then I returned to it months later to make it novel-length.  If it seems episodic, that's because it is :)

What other books would you compare this story to within your genre?  Er. It's a bit like a flip version of Anne Aguirre's Sirantha Jax books. Either that, or it's a female James Bond in space.

Who or what inspired you to write this book?  See above on space pirates.

What else about your book might pique the reader’s interest? It's awesome. You should read it. No joke. And my mum loves it!! (Actually that's not true. My mum hasn't read it. Sorry, Mum, you'll have to get an e-reader!)

How about a teaser? Well, soon you'll be able to read a big fat juicy excerpt, courtesy of the publisher, Momentum. For now, here's the cover copy:

Carrie Thatcher is a tough Imperial counter-terrorism agent. Her mission: pose as a sexy cyber-thief to entrap the notorious rebel Dragonfly, who’s planning a heist on the space station Casa de Esperanza – an orbital casino on the fringe of Imperial space.

And this assignment’s personal: Dragonfly murdered her closest friend, and she’s in no mood to show him mercy. Even getting stuck with the partner from hell—Malachite, her sociopathic ex-lover and the Empire’s most dangerous agent—can’t dampen her relish for the kill.

With Carrie’s expert weapons skills and penchant for cracking codes, insinuating herself into Dragonfly’s confidence should be easy. But is he the ruthless killer she was led to believe? Or has her precious Empire deceived her? With Malachite watching her every move, the slightest flinch in loyalty means death.

Carrie is soon racing to uncover an audacious treachery that will shock the Empire to its core … if she can stay alive for long enough to expose it.

Cool, eh? Release date is 1 December, in e-book for Kindle, iBooks and whatever else. There's also a paperback version, if you're really keen.

So there ya go. The Next Big Thing: kick-ass-chick space opera. With pirates, and math-geek terrorists. You heard it here first.

P.S. I'm supposed to tag some folks for this meme... I think I'll ping you folks on FB. Seems easier that way...
Posted by Erica Hayes at 2:10 AM 12 comments

Email ThisBlogThis!Share to TwitterShare to FacebookShare to Pinterest
Links to this post
Labels: cool if i may say so myself, cover art, dragonfly, kick-ass chicks, oh my god this is awesome, space opera 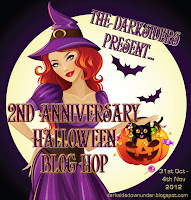 Thanks to everyone for joining in the Dark Side Down Under Halloween party. The winner of my little giveaway is...

Lilliana has won her choice of my ebooks HUNTER'S BLOOD or DRAGONFLY. Congrats!

Hope you all had a spooky Halloween!

P.S. Do you like cover reveals? Of course you do. I have the brand new fab cover art for DRAGONFLY from the peeps at Momentum Books. Almost. Just you wait...